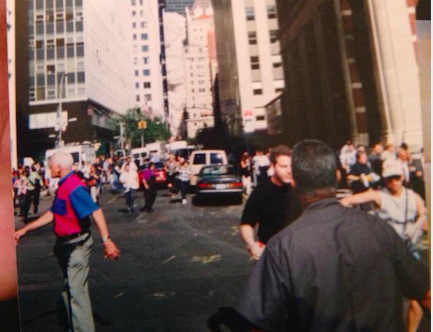 I remember that day being crisp. The kind of fall day that lets you know summer isn’t coming back.

I was dressed to impress that morning. My best suit. I had an 8:30 meeting at the building next door to the New York Stock Exchange. A firm I was trying to do business with. For the life of me I can’t remember their name anymore. Funny how that happened.

I was in the meeting when a young man interrupted us. He was very excited.  He said a plane hit the World Trade Center. He thought it was an accident. We all did. But the man I was meeting asked if I would come back another day. Maybe he felt something bigger was up. I agreed to come back.  I never saw or heard from them again.

I went down to see the “accident.” I made my way to the front of the New York Stock Exchange. There was already a crowd. The first thing I noticed was that there was paper flying overhead. It was coming from the Trade Center. I picked up a piece and saw that it was burnt. Then out of nowhere a piece of metal hit the building across from us. Like it had been flung from the Trade Center. We all jumped back.

It wasn’t long before someone yelled about another plane coming. Naturally we all thought it was just a passenger jet flying by. We never thought it would hit the second tower until it did. That was shocking. I still can’t describe the sound of it. We were only three blocks away. It’s strange, but I distinctly remember thinking of the movie Jurassic Park. About the shock in Sam Neill’s face after seeing a living dinosaur for the first time in his life. It didn’t seem real. That’s how I felt.

Some friends say they knew immediately that we were under attack by terrorists. I didn’t. But some inner voice told me to go and buy a disposable camera, which I did.

Thats when I heard a long roar unlike anything I ever heard before. It was the sound of fighter jets flying over Manhattan. I never heard anything that loud in my life. I think the tall downtown buildings amplified the noise. It was the sound of war in downtown Manhattan. I didn’t know what the heck was going on. It could have been an alien invasion or an invasion from another country for all I knew. It was the first time that day I became frightened for my own life.

An hour or so later we learned that it was probably a terrorist attack. The immediate danger seemed to have passed.  We were all talking to each other the way groups of people do after a tragedy. That’s when all hell broke loose.

Had you asked me for a list of things I thought impossible, watching the Twin Towers go down would have topped the list. So that was the last thing I expected to happen when I began to hear a loud rumbling. I didn’t know what was happening. So without knowing it, I began to take pictures as the towers collapsed.

Below is the last picture I could take before the smoke would have overwhelmed me. First I saw people running at me through the lens of the camera. When I put the camera down I saw smoke the size of a building coming at us. You can make the smoke out in the picture I included with this post. It looks like a building.

I had just made it onto the FDR drive when I began to hear the rumbling again. I turned around and watched the second tower come down. I remember thinking of friends who just died. Then I remembered how close I came to working there. It was all very shocking.

I turned around and began to walk up the FDR drive with hundreds of other people. We were all covered in dust and grime and disbelief. Nobody talked. There was nothing more to say.

When I got home I took off my suit. I was still dirty but I laid in bed anyway. I made calls to loved ones but I couldn’t really talk. That was a first for me. I remember wondering if I was numb from shock.

The next day I made my way into city. I just had to go. I had to see it again to believe it. And I felt I had to help. I think all New Yorkers did.

I made my way to the Armory on 69th street. I was struck by the thousands of pictures of missing persons I saw posted on the wall. I remember thinking they looked so happy. It was all very surreal.

Someone said help was needed downtown. I headed for the West Side Highway. The actor John Turturro joined me. We talked for hours together as we made our way downtown. Complete strangers bonded by a shared traumatic experience. I wonder if he remembers that.

President Bush came to town three days later. Flanked by the FDNY, he grabbed the bullhorn and said “I can hear you! The rest of the world hears you! And the people – and the people who knocked these buildings down will hear all of us soon.”

I began to cry.